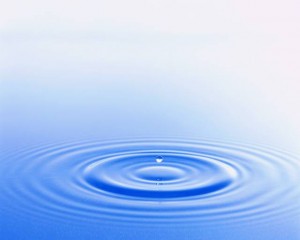 Imagine a placid, still mass of water (an infinite lake or ocean).
Now imagine a tiny wave or ripple on its still surface.
The wave could be said to be the “first vibration”.
Note the wave is “with” the ocean
and the wave “is” the ocean.

Replace the word water with consciousness.
The first wave or vibration is the “I” notion
(notion is thought, idea or “word”).

Now this “I” being the SELF and therefore having creative powers (Shakti) by its projection or outward movement, like ripples of waves on water, creates other vibrations or „charges” in consciousness, which are the “substance” of which subatomic particles are made which in turn are the precursors of electrons. Electrons in various combinations make a variety of atoms which combine to make molecules of elements (only about 120 in number) which again in various permutations and combinations make all the matter of which the world is made including all mineral, plant, animal and human forms.

Contrary to what is believed and taught by Physicists, Cosmologists, Geologists and Astronomers the world was not 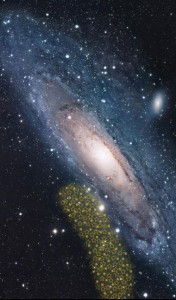 But this is not known because our entire experience of the world is based on sense perception (a perception of the five sense organs). In this way the world appears solid, real and permanent. It is perceived as form and events, giving the illusion of it having the dimensions of space and the illusion that it is created in time (billions of years ago).

Now the purpose of this discussion is not to formulate a theory or state a hypothesis but to get at the Truth by actuall having first hand “experience” of the world as it “really is” and not as it appears to be. To even actually experience the creation and dissolution of the world (if at all that is possible).

Coming back to the beginning of the discussion. First there was the “I” (the word…Bible), and the “I” being “SHAKTI” projects out producing vibrations of creative energy which coalesce as electrons and atoms to form matter…the world.

This “I” was not there billions of years ago to create the world but is the very “I” known to you which identifying with your body and mind makes you experience yourself to be this separate human being.

This identification is so strong that body and mind and through them the world is experienced, but the “I” itself is forgotten or recedes to the background.

The TRUTH can be revealed and creation “experienced” if attention or awareness is turned toward this “I” (since it is the point of creation) not by thinking or visualising but by subtle inward awareness, which is the most direct meditation or inquiry into the SELF.

This inquiry is a research, far more serious than done in expensive laboratories, yet requiring no laboratory to do for you are the laboratory and the researcher.

Again I stress the “I” that makes you feel so sure that you are this body (having size, shape, colour and mobility) and mind (having feelings, perceptions, ideas, experiences, memories) is also the “I” that creates the world as described above.

So the “TRUTH” or secret of the world is latent within you. It is within your reach and up to you to investigate it (through meditation) or else continue to identify with its projections (body, mind and world) and suffer as we have been doing for thousands of years.

You are responsible for this decision and the choice is…to continue identifying with the projections and experience separateness, conflict, limitedness, selfdestructiveness, superficial beauty, transient pleasure and so on or investigate the TRUTH of the world and see the world “as it is” and then live naturally in unity, spontaneity, harmony, beauty, love, freedom and eternal life while still in this body.

The inquiry is easy, liberating and energizing and can be done by anyone but requires commitment, alertness, focus, patience and perseverance and the guidance and presence of a living Teacher.

However great the limitedness a human feels, he has the enormous responsibility to experience the magnificence of creation because the fact is that the creation and Creator are one, the “I” is the SELF, the wave “is” the ocean.

But one has to inquire or meditate into this, perhaps with the question “Who am I?” taking your awareness to the “I” and keeping it there all the time till its final culmination of merging with the SELF. In that moment the magnificence of the Creator and the process of creation comes into being and the TRUTH is revealed.

Who am I?
This is the central question behind all human quests. Who is this “I” that perceives, interprets, and judges the world and itself, based mainly from past experiences?

The pull of the world
How can we answer this question when the world constantly pulls at our senses and reaffirms our false sense of reality? Our senses gravitate toward this outer experience where we continually search for confirmation of who we think we are.

Shifting awareness
Dr. Awatramani teaches that by seeking answers to life questions in the outer world, we chase the reflection and not the source. Instead, he uses the gift of deep silence to help students shift awareness from the observed to the observer, from experience to the experiencer, from the periphery to the source.

The still point within
This shift in awareness toward the source of being can open the door to the fundamental change we seek in life. It is this still point within where we discover that there is no world apart from us, and where we may taste the peace and infinite consciousness which is our true home.
Since the heart is bliss... you won't experience it,
you'll become it.